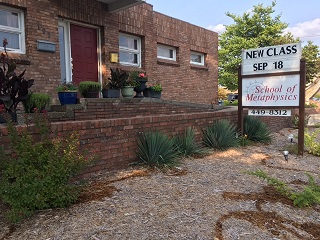 Located directly across
from the public library

Doug Bannister graduated from Penn State with a BA in political science/history and a minor in religious studies in 1968.  After a three-year hitch with the Army including a year in Vietnam, he moved from his home state of Pennsylvania to Enid, Oklahoma in 1983. He first studied metaphysics with Audle Allison at the Lotus Center in Oklahoma City. After Audle’s passing he focused on his concrete career.  Some decades later he began classes at the Oklahoma City School of Metaphysics. Applying the Universal Principles gained from both schools, Doug built successful businesses in Oklahoma City, contributing to the decorative concrete industry in major ways and openly sharing his knowledge with many hundreds of contractors around the world.  Now retired from the concrete industry Doug dedicates his efforts to bringing greater peace, compassion and understanding to himself and humanity.

Doug has studied with the School of Metaphysics since in 2006 and currently directs the branch in Columbia, MO. Doug holds certification as a dream interpreter, is completing the PSI Counseling program and is on his way to becoming an ordained minister. He is completing his studies in the last of the four-tiered Mastery of Consciousness program with the School of Metaphysics.